Growth conditions Edible fungi grow in their white or light-colored mycelium in a place rich in organic matter. When appropriate conditions form fruiting bodies and become a favorite product for humans. Mycelia and fruit bodies are the two main stages of growth and development of common edible fungi. All kinds of edible fungi are classified and identified according to their fruit body morphology such as mushroom shape, mushroom cover, bacterial fold or sub-solid body, spores, and mushroom stalk, combined with differences in ecology, physiology, etc. , Mumumu, Tetraemmus, Agaricales). When distinguishing between wild edible fungi and poisonous mushrooms by experience, it is based on the shape and color of the fruit body. Some edible mushrooms grow on dry trunks or wood sections, such as mushrooms, fungus, white fungus, oyster mushroom, hedgehog, needle mushroom, and oyster mushrooms; some grow on the stems of herbaceous plants and the dung of livestock and poultry, such as mushrooms and grasses. Mushrooms, etc.; and co-growth with plant roots are known as mycorrhizal fungi (see mycorrhiza), such as pine mushroom, boletus and so on. The above characteristics also determine the distribution of various wild edible fungi in natural ecological conditions. Edible fungi do not require strict humidity conditions during the growth phase of mycelia, but when the mushrooms are bred or when they are eared, the relative humidity in the environment needs to be above 85%, and appropriate temperature, ventilation, and light are needed. Such as mushrooms, mushrooms, mushroom, mushroom, pine mushroom and other suitable for the lower temperature in spring, autumn or in the low temperature zone (15 Â°C or so) mushroom; mushroom, fungus, Pleurotus, etc. are suitable for summer or tropical, Subtropical areas are strong under high temperature conditions.

Edible Nutritive Value China is rich in edible mushroom resources and is one of the first countries to cultivate and use edible mushrooms. More than 1,100 years ago, artificial ear cultivation was recorded. At least 800 years ago, mushroom cultivation began in southwestern Zhejiang. The straw mushroom was first cultivated in the area of â€‹â€‹Fujian and Guangdong more than 200 years ago. These technologies have been circulating so far. The protein content of mushrooms is generally 1.5-6% for fresh mushrooms and 15-35% for dried mushrooms, which is higher than ordinary vegetables, and its amino acid composition is relatively comprehensive. Most mushrooms contain eight kinds of essential amino acids, including mushrooms and straw mushrooms. The lysine is abundant in the enoki mushroom and lacks in the grain. The lysine is beneficial to children's physical and mental development. The enoki mushroom is also known as "Mushroom" in Japan. The mushroom contains many kinds of vitamins and many kinds of physiological activity. Mineral elements. Such as VB1, VB12, Vc, Vk, VD and phosphorus, sodium, potassium, calcium, iron and many trace elements, can supplement the deficiencies in other foods. Edible mushrooms are rich in protein and amino acids, and their content is several to several times that of ordinary vegetables and fruits. For example, fresh mushrooms contain 1.5-3.5% protein, which is 3 times that of Chinese cabbage, 6 times that of radish, and 17 times that of apple. The protein content of 1 kilogram of dried mushrooms is equivalent to the protein content of 2 kilograms of lean meat, 3 kilograms of egg or 12 kilograms of milk. Lysine is very rich in edible fungi, contains 18 kinds of amino acids that make up proteins, and 8 kinds of trace elements necessary for human body. The low content of lysine in cereals is also abundant in edible fungi. The fat content of edible fungi is very low, accounting for about 0.2%-3.6% of the dry weight, and 74-83% of which are beneficial fatty acids for human health. Edible fungus also contains vitamins. Edible fungus is rich in VB1 and V12, which are higher than meat. Vc mushroom is 1.2 to 2.8 times higher than pepper, 2 to 5 times higher than grapefruit and orange, and 17 times higher than mushrooms. The original content of mushroom Vd was as high as 128 IU, which was 8 times that of seaweed, 7 times that of sweet potato, and 21 times that of soybean. VD can be converted to VD by UV irradiation and promote the absorption of calcium. Edible fungus is also rich in a variety of mineral elements: phosphorus, potassium, sodium, calcium, iron, zinc, magnesium, manganese, and other trace elements. Tremella contains more phosphorus, which helps restore and improve brain function. Mushrooms and fungus have high iron content. Potassium in mushrooms accounts for 65% of the ash content. It is a high-grade food in alkaline foods and can neutralize the acid produced by meat products. Edible fungus is not only delicious, but also rich in nutrition, often referred to as health foods, such as mushrooms not only contains all kinds of essential amino acids, but also has the role of lowering cholesterol in the blood, treatment of high blood pressure, in recent years also found mushrooms, mushrooms, Flammulina and Hericium contain substances that enhance the body's ability to fight cancer.

Corn has a more complete nutritional profile, making it ideal as a preferred food for scientific fat loss.

This classification is for the sweet corn (vegetable).

There are generally two ways to lose fat scientifically: exercise and controlled diet. Both are indispensable and must be combined for effective fat loss. Especially for people who are not particularly obese, we should consider the combination of exercise and diet control. In terms of diet control, take care that the daily intake of food is based on high quality protein and vegetables.

1. The time and intensity of exercise should be gradual. Exercise more than 1 hour a day is good.

2. exercise to control their mouths, eat less sugary food. If you are more gluttonous, you can use fruit sweet corn to satisfy your cravings. Fruit sweet corn is sweeter to eat, but it is low in sugar and satiety, which can help you control your diet.

Jilin Province Agricultural Sister-in-law Food Co., Ltd.'s Sweet Corn Kernels are vacuum-packed, healthy ready-to-eat foods with a small spoon at the bottom of each package that can be opened and eaten at any time. 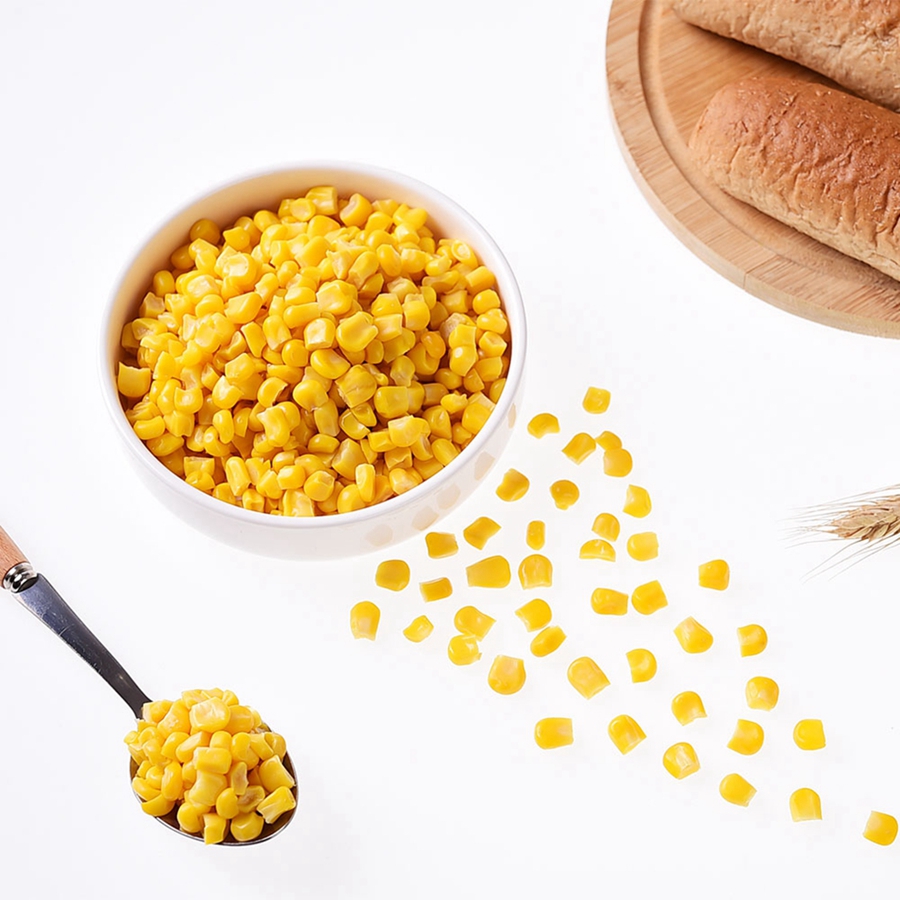 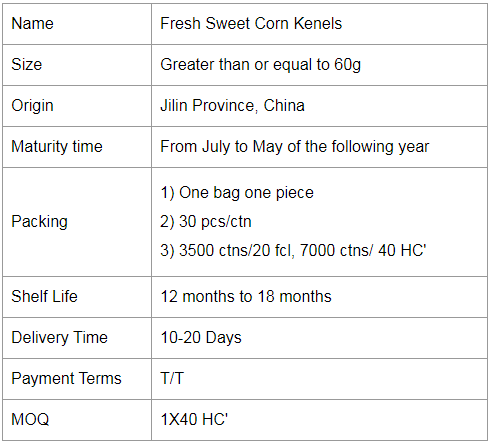 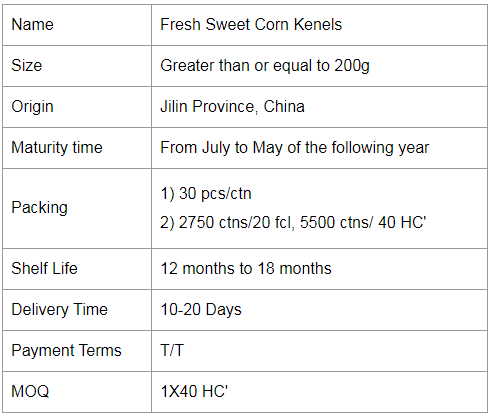 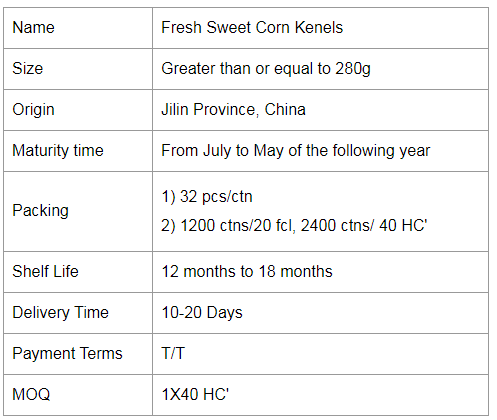 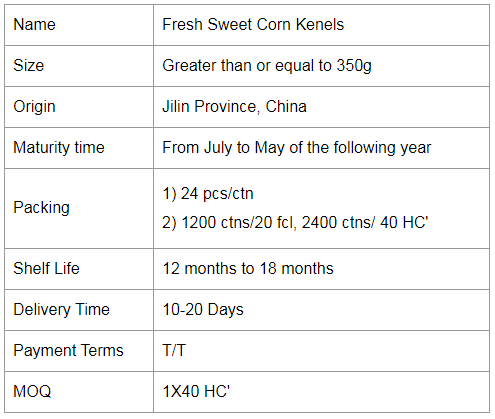