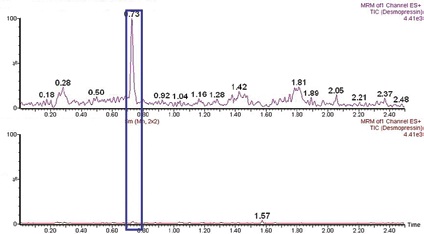 Although we observed multi-charged compounds and the molecular mass of the peptides was 1000-4000 amu, the detection of these peptides required the mass detection limit of 2000 m/z to be successfully analyzed. In this application note, for high-sensitivity peptide bioanalysis, we introduced the use of the ACQUITY UPLC system and the new high-sensitivity tandem quadrupole mass spectrometer Xevo TQ-S.

Peptide therapeutics have excellent efficacy, but they are also rapidly excreted by metabolism or by prototype drugs. In order to accurately determine the pharmacokinetic parameters (PK) of these drugs, it is necessary to have a highly sensitive LC/MS/MS system to determine the late time points to determine the elimination phase of the PK curve. The Xevo TQ-S is a new tandem quadrupole mass spectrometer with an innovative source design. This new design allows more analyte ions to migrate to the analyzer, greatly increasing the efficiency of the ion sampling process. It uses a larger sampling hole and differential pumping zone as well as off-axis multilayer ring ion transport technology to prevent neutral compounds from entering the analytical region of the instrument.

To assess the increase in sensitivity when performing peptide analysis in biological fluids, desmopressin was injected into the plasma and extracted by acetonitrile precipitation of protein (2:1). The data obtained using conventional optics and the new StepWave optics is shown in Figure-1. Here we can see that the peak of desmopressin is almost invisible in instruments using traditional ion transport technology, while the obvious peaks are seen in the Xevo TQ-S mass spectrometer. Extending the baseline of the traditional source and comparing the data in Figure-2, we can clearly see that there is a peak of desmopressin at 0.73 minutes in the traditional instrumental chromatogram. In this way, the sensitivity is increased by 25 times. 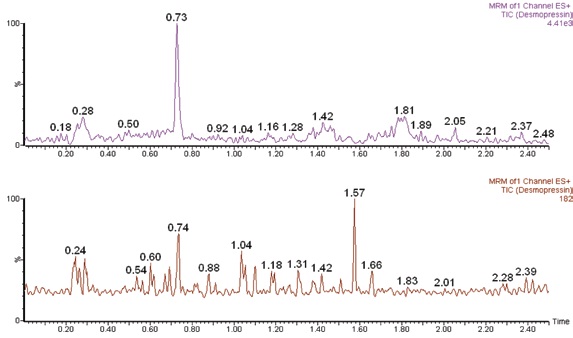 Figure-2 UPLC/MS/MS quantitative analysis of desmopressin in rat plasma extracts using MRM mode. The chromatogram above shows the peak response of the new StepWave ion transport technology using the Xevo TQ-S; the chromatogram below shows the peak response with conventional ion transport techniques (the desensitization of the baseline is extended to show 0.74 minutes of desmopressin chromatography) peak).

Polypeptide therapeutics can be used to treat new diseases with minimal side effects, drug-drug interactions, and toxicity. The combination of Xevo TQ-S and ACQUITY UPLC provides an ideal platform for the analysis of peptides in biological fluids. The combination of the two can provide: